No products in the cart.

Part Of The Solution

For every edible stickers® package you purchase, My Fruity Faces will make a donation to our nonprofit partners to support healthy eating for kids

Childhood obesity has reached epidemic proportions. According to the data from U.S. Centers for Disease Control and Prevention more than one-third of our kids are overweight or obese in the U.S. alone. The numbers have tripled in the last three decades. The percentage of children aged 6-11 years in the United States who were obese increased from 7% in 1980 to nearly 18% in 2012. 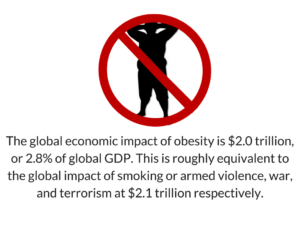 Similarly, the percentage of adolescents aged 12-19 years who were obese increased from 5% to nearly 21% over the same period. In the United States, one in every three children (31.7%) ages 2-19 is overweight or obese, and because of those kids that are obese tend to become adults that are obese. More than 35% or 78.6 million of all American adults are obese up from approximately 12% in the 1980’s and 1990’s according to the Journal of American Medicine (JAMA).  The cost associated with overweight and obesity-related diseases have risen to $147 billion per year and if continued at its current trajectory it is estimated that it will double to $300 billion by 2030. One of the major drivers is due in large to the risk of health complications later in life such as possible increase of heart disease, stroke, diabetes, hypertension and various types of cancers.

Regrettably, the obesity epidemic has also gone global. More than 2.1 billion people roughly about 30% of the global population today are overweight or obese. However, “The worst thing is the children are becoming programmed for obesity, it’s a very serious epidemic,” Abelardo Avila a physician in Mexico told the Global Post. The Post went on to say in Mexico alone 70,000 people die each year of diabetes – “or roughly equal to the deaths authorities say are caused by more than six years of the country’s Drug wars.” If its prevalence continues on its current trajectory, almost half of the world’s population will be overweight or obese by 2030.

In addition, obesity is responsible for approximately 5% of all global deaths. The global economic impact of obesity is $2.0 trillion, or 2.8% of global GDP. This is roughly equivalent to the global impact of smoking or armed violence, war, and terrorism at $2.1 trillion respectively.

With that said, one of the most alarming facts and perhaps the most disturbing is that for the first time in history, the current generation might be on track to have a shorter lifespan than their parents.

Be a part of the solution

Although we’re facing an epidemic of global proportions there is no single or simple solution about the way forward.  This 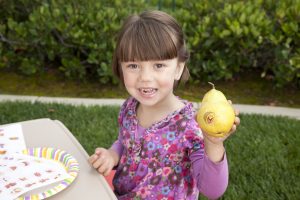 reflects the fact that obesity is a complex and systemic issue and finding solutions to combat this problem will require a holistic approach on a sufficient scale.

This approach will not only involve childcare and healthcare professionals but also state and local organizations, policy makers, community and business leaders, schools and individuals working together to create an environment that supports a healthy lifestyle.

And that’s where you come in when you buy a package of My Fruity Faces ‘edible stickers®’ we tally up the number of packages sold and make a monthly donation to our non-profit partners. With that said,  given the enormity of the problem, we understand that this alone will not reverse the childhood obesity epidemic but it’s a start and we’re up for the challenge. We have our work cut out for us but together we can make a difference.

What Your Purchase Supports

For far too many people, and especially for those living in low-income communities, healthy food is simply out of reach. Finding quality fresh fruit and veggies means either traveling long distances or paying high prices.

With these challenges, it’s no surprise that we’re facing high risks of obesity, diabetes, and other preventable food-related health issues. We’re working with our nonprofit partners in suburban, urban, and rural low-income communities to help forge a solution to this problem.

The Guidelines currently serve as a foundation for nutrition interventions and education to improve health. We’re working with our nonprofit partners to influence cultural norms, family norms, education, and in the case of children, parents’ decisions to influence food choices.

In recent years, a growing body of research has documented the association between environmental factors and physical activity in kids. A recent study found that factors such as access to recreational parks and schools, the presence of controlled intersections and sidewalks, and access to destinations and public transportation were associated with physical activity in children.

Furthermore, a review paper reported that home and school environments were associated with activity levels in children, whereas low neighborhood crime incidence was associated with physical activity in older kids. Other recent studies suggest that the proportion of green space, number of cars, number of accessible destinations and safety contribute to kids physical activity.

Overwhelming research has shown that aspects of the physical environment can shape behaviors related to obesity in kids, therefore, we’re working with our nonprofit partners to help kids have access to safe environments so they can have safe places to play.

Kids who are obese are at a high risk of emotional problems that persist well into adulthood, according to several experts and studies on the subject. Moreover, obese children between the ages of 10 and 13 have an 80 percent chance of being obese adults. (Source: American Academy of Child and Adolescent Psychiatry, Facts for Families, January 2001.)

Furthermore, a study at the University of Medicine and Dentistry of New Jersey found that obese boys and girls with low self-esteem had higher rates of nervousness, sadness, and loneliness. The study also reported that obese girls ages 13 to 14 are four times more likely to experience low self-esteem than non-obese girls.

In addition, these kids were more likely to drink alcohol and smoke and compared with obese children with normal self-esteem. Depression, often an outcome of low self-esteem, affects as many as 750,000 teens in the U.S. (Source: Pediatrics, “Childhood Obesity and Self-Esteem,” January 2000.)

In summary, what these studies show is that there is a clear link between obesity, anxiety disorders and depression among kids. Therefore, along with an explanation of the long-term medical impacts of a healthy lifestyle, we’re working with our nonprofit partners to encourage kids to make smarter choices and understand the benefits of being physically active and eating healthy which helps them feel better.

Created with by © My Fruity Faces 2019. All right reserved

Use this form to find things you need on this site