No products in the cart.

Home / Blog / How Can We Solve The Childhood Obesity Epidemic?
Return to Previous Page 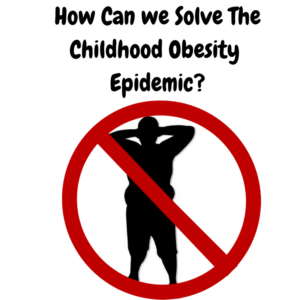 How can we solve the childhood obesity Epidemic? Before we can truly answer the question, we have to fully understand the magnitude of the problem.

One of the most alarming statistics and perhaps the most disturbing is that obesity is responsible for approximately 5% of all global deaths. This number is staggering when you think that the global economic impact from obesity is roughly $2.0 trillion, or 2.8% of global GDP. This is roughly equivalent to the global impact from smoking or armed violence, war and terrorism at $2.1 trillion respectively.

And for the first time in history, the current generation might be on track to have a shorter lifespan than their parents. In the United States, one in every three children (31.7%) ages 2-19 is overweight or obese (White House Task Force on Childhood Obesity, 2010).

In addition, according to a report from the United Nations Food and Agricultural Organization, the U.S is the second largest developed nation with 31.8 percent of adults that are considered obese just recently being edged out by Mexico at 32.8 percent. The statistic is based on people aged 20 and older whose body mass index (BMI) is 30 and above. Body Mass Index (BMI) is a simple index of weight-for-height that is commonly used to classify underweight, overweight, and obesity in adults.

However, the real danger is the health complications experienced later in life such as possible increase of heart disease, stroke, infertility, diabetes, hypertension, cancer and in some instances early onset diabetes in children.

And because kids that are obese tend to become adults that are obese. More than 35% or 78.6 million of all American adults are obese up from approximately 12% in the 80’s and 90’s according to the Journal of American Medicine (JAMA). And the cost associated with overweight and obesity-related diseases have risen to $147 billion per year and if continued at its current trajectory is estimated will double to $300 billion by 2030.

With that said, Solving the childhood obesity epidemic will not be an easy task. It will require a holistic approach from society as a whole: from policies that will need to be enacted from our law makers, programs that will need to be introduced at schools at all levels, involvement from entrepreneurs and executives of private and public companies and much more.

However, the most critical and most important place to start solving this issue is in the home. Here a few steps parents can take in helping curb childhood obesity. Listed below are a few suggestions:

These are just a few suggestions to encourage kids to adopt a healthy lifestyle that will last them a life time.

The first and only Edible Stickers™ stickers for fruit and veggies. Bring your fruit to life!

How Dangerous Are Food Dyes To Our Children’s Health?

Use this form to find things you need on this site